It has become customary for the sheiks preaching in mosques to talk, in their sermons and lectures, about "the infiltrating infidel West," "the European-Crusader West," "the abode of infidels and the abode of Islam."

I have presented claims that the Muslims in Andalusia engaged in fornication, homosexuality, and debauchery.

Today, if you go to the West and tour the European continent, where there are 50 million Muslims... 80 % of these Muslims are beggars, living on Western welfare. In other words, the European pays taxes, and the state gives the Muslim money to buy food.

The Muslim in the West does not earn his daily bread.

Let me give you an example from Sweden.

Every mosque in Europe suffers from theft.

In accordance with the European law for support of religions and cultural diverity, the state provides Muslims with funding, and the managers of the mosques steal those funds.

At times, you encounter an Imam who employs his wife as the floor sweeper, and then tells her to stay at home.

Then you have fake divorces. A Muslim divorces his wife on paper, and when social services give her a home, he takes his wife back and they rent out the house on the black market.

I used to visit Muslim prisoners in the West. These drug dealers and rapists would say to me: Tell the warden to get us halal food. They wanted their meat slaughtered in the Islamic way.

I would say to them: Even if you were eating pork, it would renounce you. You peddle drugs in the name of Muhammad and Islam, yet you claim that you belong to the pure Islamice civilization. The Muslims do not rise to the level of their religion. The bombings that took place in London, in Madrid, and all around, the Western image of a Muslim boastfully slaughtering... The camera shows a long-bearded Muslim slaughterin another Muslim, while crying "Allah Akbar."

What do you expect from the West when it is exposed to such rotten ethics? To simply ignore this and absolve them?
Lähettänyt jlokka klo 22.40 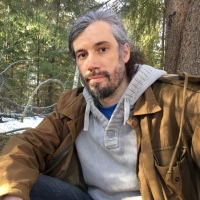